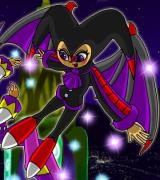 Xay hasn't added any friends yet.

I've always found that with Sega games. There's always juicy bits left out of the final product. Granted sometimes they're not always as interesting as, say, the Sonic 2 Beta/Alpha, but regardless, it's still very neat finds. This isn't any exception.

And my guess about the cut scenes? Well, i like to think it might have something to do with "dumbing down" the whole thing. Sega has been paying a lot of attention to their new major fanbase, and surely they must realise that a lot of their fanbase really can't take much more then small burts of info at a time (explaining why all the bloody training missions are seperate missions then stuck together in one bloody level...), and that, generally speaking, a slow, easy, and uninformative script is really all they can process in thier heads. I hate to be a stereotypical Sega-Basher here, but just take a look at Sonic in recent years- Dumbed down to the point that it's borderline retarded.
...
Either that, or i'm just cynical, and it was due to time constraints. Who can say?


In either case, i think it can be said all of these finds prove NiGHTS JoD could've been much better then it turned out to be, but once again, It just wasn't to be. Interesting finds regardless.

Tomorow Comes Today by Gorillaz
and
No Good (Start the Dance) by The Prodigy.

In a moment of 'Just-This-Second-Realisation', i just realised No Good would make a good song for some NiGHTS boss music. .___.;

Hmmm, that is peculiar... But, having little to no Programing Knowlage, i wouldn't know was causing it. However, i do know a little Programing Jargon, and Moonlighttrill's theory makes a fair bit of sense.

Now i just need to get my hands on a copy of the game and see if i can get this Glitch to happen myself. And possibly any other hidden glitches or fuckups lying around in the Programming. =P

In Topic: And The Winners Are...

DiGi, I WANT MY PHRASE BACK AND I WANT IT NOW. D8<

And congratulations to the Winners, you lucky... 'Somethings'.

NiGHTS Into Dreams... (But of course!)

Sonic CD (U.S. and JAP Versions. Both soundtracks have their Stinkers and their Shiners.)

Music from the first 2 Street Fighter EX Games (Im sorry, the games might have been bad, but the Music is some of the best in the SF Series hands down. ESPECIALY EX2 and EX2+)

The Main Theme from the first Space Harrier (Right up there with the Ledgandary 'Opa Opa!' from Fantasy Zone and 'Magical Sound Shower' from Outrun. Good times, goooood times.)

And on a incredibly random note, and 8-Bit Chiptune ReMix of... Never gonna give you Up by Rick Astley. Yes, im Rickrolling myself every damn day- Watch me care! XD