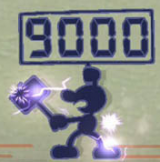 firelord767 hasn't added any friends yet.

In Topic: A question asked out of curiousity

I think of banging my head against the wall. A lot. Partially because the game is rather short, partially because the voice acting drives me nuts, partially because i can't switch said voice acting to Japanese, partially because Pians aren't Chao, but mostly because what is considered an easy, breeze-through game is so difficult for me. A lot of games can draw frustration out of me. You'd be suprised how many. For the same reason, JoD gives me a bit of an empty, incomplete feeling because i just can't finish it. And then there aren't many levels to replay that i can handle (i count 5), and then no one's ever online, so it's also pretty empty. So headaches, frustration, and hollowness. However, if you asked me whether or not i enjoyed it, i'd say i love it. I wish that added up somehow :/

I never played Pokemon competitivaley, but to my knowledge, a well brought up Gyrados is powerful and KOs opponents. A Gyrados with increased attack power is scarier, if if it just used Leer or something. At least I have the comfort of knowing that for every PkMn of mine that one kills, i take a little bit of it's HP with me. It might take 2 or 3 Pokemon, but I can chip away at a Gyrados for sure, even if it could take down my entire team if it was 6 one on one battles. Now Gyrados kills one of my team members, and it gets STRONGER?

I'm sure those of us familiar with Pokemon WFC and competitive battles understand the balance of the game better than I, but when you think about Overconfidence Gyrados on it's own, it's awfully threatening. Especially to my run-of-the-mill team, none of which IV raised.

Also, you know that weird yellow thing in the desert place? I dunno it's name, but I saw my friend battle it. He downloaded the game, but I don't have an r4 and hate emulators. Anyway, that thing. He kills every single one he encounters. Never runs. Never catches. Take a look at it's face and then read this paragraph again.

All right, i've made my post, and it consists of a semi-casual player's POV on Overconfidence Gyrados and a n00bish ambition to kill every single one of that yellow desert thing with that odd smile by my friend and me, of course, when i get the game. Intelligent posters, you can have your thread back now.

At first when i looked at this, i couldn't think of anything that would work to well. And then Reala was mentioned. Reala suits Halloween pretty well. I wonder if any of the forumgoers here were Reala for halloween. Anyway, can't wait for the picture to turn up. I bet it wasn't that bad, even if you are poor with a knife.

With any luck, someone has this lying around somewhere, or it'll turn up like a beta ROM does one day, but for now, it doesn't look to good.

If it is just an emulator and maybe some updated graphics, than odds are it would play just the same as a NiGHTS ROM on a fan emulator anyway, right? It's still a shame that it's not out there right now, though. Youtube doesn't even have vids :/

I wonder if this does damage to Reala. I mean, you usually have to paraloop to do damage, but a glitch like this seems awfully convenient, being a dance as opposed to a flickering screen or some sort of camera error, like an Easter Egg or something.

This is a pretty neat find. Makes me wish i had this game to try this for myself. I wonder what compelled whoever made this video to try and drill-dash before the battle. I would've assumed that NiGHTS was frozen and would feel cheated that my drill gauge went down anyway.