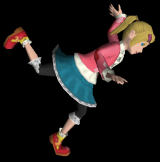 That makes me sad that we can't select the boss anymore. I loved using Puffy or Gulpo to get a top score

(though I can't really use Puffy reliably in this one XD). I actually had few problems with Gulpo. Maybe I just got lucky on the first try. But I do think Wizeman was changed and is somehow way easier in this port than in the original. I 2.0ed him my first time in each of the Twin Seeds; I can't do that on the Saturn. I guess the straighter controls leave less room for me to swerve into his obstacles ^^' Also, I noticed a larger "gap" in the flying snow rocks barrage. I was too easy for me to sail through. It'll give me a higher score, yes, but I feel like I haven't earned it.

In Topic: So who's buying the game on multiple platforms?

I already bought it for PS3, and I'm waiting for a PC version ^w^ If NiD was on more systems that I own, I'd definitely get it on all of them.

I've noticed problems, too, but it feels like every time I've first played a NiGHTS game, so I figure I'll get used to it. A modified controller would help, though, if someone can point out a PS3 controller with a shorter analog stick << My main issue in the short time I've had to play it, though, is Puffy. The camera seems to be centered on her rather than facing forward. I couldn't see where I was trying to throw her half the time, so that's something that definitely needs fixing...

in other news, anybody get the NiD theme for PSN yet? Pretty cool that there is one..

I didn't know there was one!

I need to buy another PSN card, then.
Also, I've heard about a PC version, but I can't seem to find it for purchase online. I was at GameStop yesterday and didn't see anything, either. Does anyone know where I can find it? I really want to be able to play NiGHTS outside of my apartment. ^w^

In Topic: Finally out on PS3!

It felt wonky to me, too. I never got the chance to play the PS2 version, so I don't have that comparison, but I wasn't able to make link chains that I often can even when out of practice. I thought it was just the controller, because I've only ever played NiD with the 3D Saturn pad and my thumbs are disproportionately short. Well, that makes me a little sad that it's the game itself. Hopefully I can adjust.