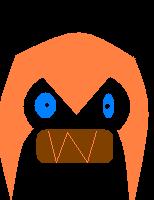 XxJacklexX hasn't added any friends yet.

Lol I'm restarting a 2 year old thread but...
One night, I wasn't sitting at my table and drawing a Nightmaren that I named ODEiON. It was a level 2 Nightmaren, it was like jackle but he shoots out film and records. In Latin, ODEiON means "A roofed theatre". So I drew his nightmare like a big clip of a movie. So I dazed off for some reason and I dreamt I was watching a movie with my parents. When I go out to get popcorn. I come back in to see the whole theatre gone. Then ODEiON jumped out of the screen! I ran an ran but he took my ideya. I was laying on the floor to wake up to NiGHTS in the JoD attire. He helped me up and we duelized. We defeated ODEiON and I got back my yellow ideya. The rest was lost but I'm sure ill find it as I WILL dream tonight.

In Topic: The true story of Selph.

I see that nights and reala look similar. But the creator said that he was CUT at the LAST minute. Meaning that selph's files must still be in game. That means that reala already existed. So reala is a person by himself. But I have another theory. I think selph isn't only nights but his maren ability is to copy someone's appearance. But if that's so, why is he NiGHTS in twin seeds?