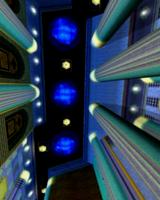 Hello! My name is Al-Di-La

Something creepy on Twin Seeds Tower?

I was recently just searching through some old NiGHTS website bookmarks I had and found this one http://www.nightsint...evel/dreams.htm Obviously from the older version of this site I believe and I think it would make a nice addition to the site as it is now. However as I was re-reading all of the level descriptions and the Did You Know? parts when I came upon Twin Seeds' and found this curious bit:


"Did you know?:
Nobody is actually 100% certain that this stage is supposed to be taking place in dreams. Some fans speculate that it is Wizeman blurring the line between reality and sleep.

Also... if you want to see something creepy, on the final mare keep flying upwards past the circle of balloons around Twin Seeds tower."


Not sure if anyone has mentioned it yet and I know it's probably nothing, or just a joke, but since I can't play my game at the moment I was curious if anyone has done this and what they saw?
And also, were any of those 'Did you know' things official or not?