If you're tired of the Halo 3 hype, click here

Found this on YouTube a little while ago. It really puts all the Halo 3 hype in perspective, you know?

I don't know who first suggested this -- Jof and/or Purgatory, probably -- but someone noticed a redheaded girl in the trailer and thought she might be Claris.

I was skeptical at first, but then I posted this side-by-side: 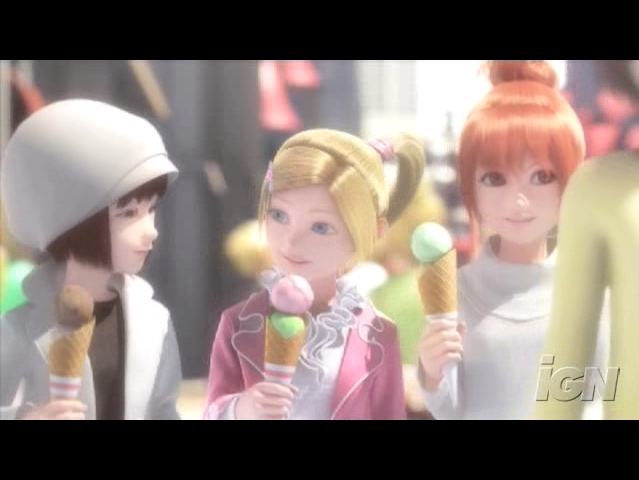 And I was convinced, just like that. If the girl at the right isn't Claris herself, the character designers are giving her a hell of an homage.

Come to think of it, we never got to see any of Claris' friends in NiD. We got to see Elliot's teammates -- not to mention his rivals -- but we never got a glimpse of Claris' social standing. Could Claris have been friends with Helen this whole time?

And if this is Claris, where does Elliot come in? How will he be recognizable without such strikingly blue hair (they tempered Claris' pink hair, so Elliot's blue hair will have to be modified as well)?

So, what do you think? Is that girl our Claris or not? And if so, what could that mean for the storyline?

Brought to you by submas13.

It's an interesting question of whether or not NiGHTS is invincible. You could make the argument that if NiGHTS is mortal, Wizeman could have, would have and probably should have killed our favorite Nightmaren instead of trapping him/her in the Ideya Palace.

However, seeing as every other Nightmaren that we know of can be killed, I think it's fair to say that NiGHTS would be no exception. What say you?

They're keeping the NiGHTS theme!

If you haven't already done so, go to the Japanese JoD site immediately!

Stay at the home page, and you can hear a beautiful song that clearly incorporates the familiar six-note progression that is nearly synonymous with NiGHTS!

As I'm listening to the song, my every doubt and worry about JoD's music is being smashed to pieces. Truly phenomenal stuff.

Most importantly, THEY'RE KEEPING THE SIX-NOTE PROGRESSION! Easily the most important part of NiD's score and I'm hearing it played with more beauty and feeling than ever before.

I am very happy about this. How about you?

The news from the last day at Leipzig revealed this much about the Wiimote-only control: How to play as the kids. With Wii-mote only control, the kids will be controlled with the D-pad, using the 2 button to jump and the 1 button to throw blue orbs (which can only be collected by NiGHTS, by the way). Now, if you know anything about the Wii, you'll know that this means holding the Wiimote in the handlebar position.

So here's the big question: Will the entire game control that way? Personally, I think it'd be strange to constantly switch from handlebar control to remote control. But then, the billion-dollar question is how paraloops are handled with handlebar control.

What do you all think?