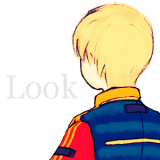 Woo, off topic artwork! Awesome. Anyway, I have artwork. First up- a self portarit which dooooesn't actualy look like me, but I like how I did it anyway so ehh XD

Pfft. I have a MILLION things I really, really need to scan in Â¬_Â¬ I'll bother eventually, I'm sure. XD Oh, and is anyone interested in me putting up my Harry Potter/Doctor Who livejournal icons, like I did with the NiGHTS ones in the NiGHTS artwork forum? I'm making a lot at the moment for National Art Making Month... one or more a day in fact (I'm a bit obsessed at the moment XD)

How many people have you met that know of NiGHTS?

I was just curious... I know NiGHTS isn't exactly the most mainstream of games, but I got a bit of a shock today, haha- a boy in my class mentioned he was getting NiGHTS for the Wii, so I jumped in and asked if he'd ever played the original game, which he said he had. Which actually really surprised me, since I've never heard anyone say they'd even heard of the game before, or even the Sega Saturn... It got me wondering- has anyone else had any unexpected moments where someone has mentioned NiGHTS, or what? A stranger, even, who you got talking to or whatever. I figure it'd be cool to hear any stories... or maybe you got someone interested in NiGHTS through brainwashing? XD

Anyway, hopefully this is okay to post =) It's not too off topic or anything, is it? Well, at any rate, post any stories you have =D

Hiya! First off, some dreamscapes I did on the oekaki.

Aaand another oekaki pic that is a WIP but I'm too proud of NOT to show off =D human NiGHTS. i took some liberties with the skin tone, I like dark skin and purple =p

I totally need to draw Claris and Elliot and get my revised NiGHTS design up. i tend to tweak designs around for fun and I updated my NiGHTS one for the new outfit. It's kindafrilly.

Ooooh and I almost forgot, DreamCast's idea of MIDGET NiGHTS made me think of Alice in Wonderland... whiiich I've never read. So yeah. Here.

Hiya! =D I've always hated introductions, I'm awful at them Â¬_Â¬ Still, I might as well give it a go I suppose.

My name would be Ayries then. Well, OK my real name is Elizabeth (not Liz. Thankyou. XD) but I tend to ignore that... -cough- I'm 14 and live in England. Around the middle I think. -bad with maps- My favourite colours are pink, red and green (and yellow. And purple. Actually, I like all colours equally almost... changes around a lot! XD)... That's all the boring stuff.

My main interests are NiGHTS (obviously! XD), Sonic, drawing, photography, and I'm currently a bit obsessed with sewing, which was unexpected but oh well. Not complaining. I want to make a Claris cosplay eventually, I'm hoping to try and start this year. Oh, and I'm also completely obsessed with the show Doctor Who- if you ever need your ears talking off, just bring it up. Hehe =D

I'm quite new to NiGHTS I suppose, I've had it a little over a year or so but I'm still just as obsessed with it as I was when I first got it. Even if my Saturn does make annoying noises and white lines. I suffer for it! XD Nah, I love the game. Everything about it, but especially exploring the levels. Well, OK so i don't like Stick Canyon but I think that's just because it's so hard! XD

Anyway... I can't think of much else to say to be honest. Hope to see you all around at any rare