229 replies to this topic

I just realized I haven't mentioned a wish list of any kind yet. Let's change that. Note I may also list characters I'd like to see returning. I'm going to avoid mentioning characters from Capcom's other fighters though since most of those are no brainers. I will say though I too would like Rival Schools and Power Stone to get some rep.

Thor
Thor is my 3rd favorite Marvel heroes and it always irked me how he is the only primary member of the Avengers yet to be a playable character. The guy is a total badass and I'd love the chance to use him in a fighter. I'd either want them to use the Classic Thor outfit because it still looks cool all these years later or his Ultimates outfit because there is an awesome simplicity to it. 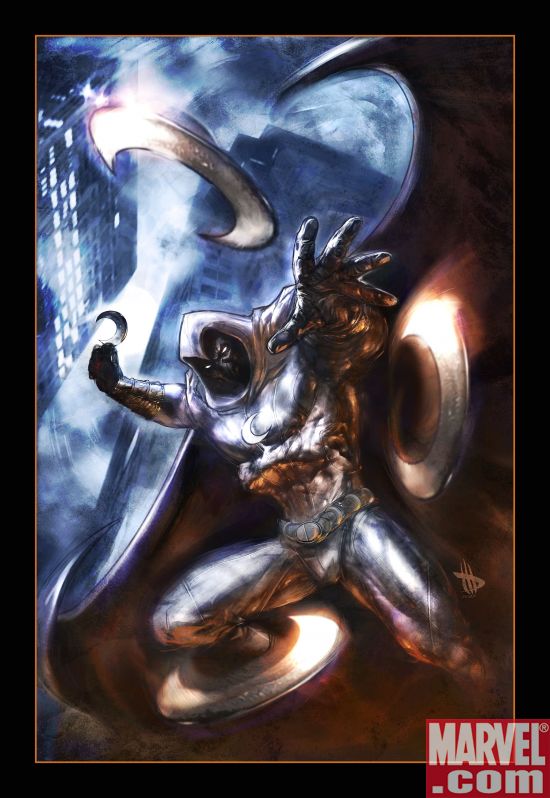 Moon Knight
He isn't very mainstream from what I gather but all the same Moon Knight is my second favorite Marvel hero. An all around awesome character whose current run in comics has been one of my recent favorites in all comics. I just want to see him in because I'm a fan but I also think his combat style could be very refreshing. He's a rough and tumble brawler really and I think a brutal ass kicking would be a welcome change of pace from all the laser beams and stuff we'll likely see in this game.

Deadpool
He's my all time favorite Marvel character. Tons of people are clamoring for him. My reasons are basically the same as everyone else. Including Wade should be a no brainer.

Juggernaut
I always liked Juggernaut a lot. I think his powers are awesome and his personality is also really neat. Go figure that the invincible avatar of an ancient god of destruction is actually a pretty down to earth guy. I'd like to see him make a return but I hope they overhaul his moves because he was kind of bland to use in the last game I think. 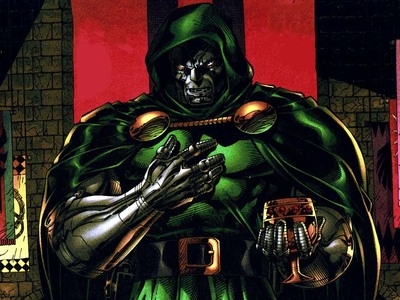 Dr. Doom
He's one of the greatest villains in Marvel as well as comics in general. He deserves to make a return. He is also wanted because he would at the very least make a good representative for the Fantastic Four. You can't really have any one member from the FF because the whole idea is they're a team, so why not just use their greatest enemy instead. Doom is just cool and a marvel icon. If we want villains in the game he should definitely be near the top.

Dante (Devil May Cry)
Kamiya's wishes be damned. Dante isn't your property anymore. Let him be in crossovers! Seriously. In the short time he's been around Dante has become one of gaming's most recognizable, beloved characters as well as a Capcom icon. He revolutionized the action genre. That his only crossover appearances to date were in an RPG and a card battle game to me is baffling. Gene (God Hand)
God Hand is a cult favorite that was all about the martial arts. Gene had I believe a couple hundred moves you could use to customize his movelist with so Capcom has a huge pool to draw from if he was in a this game. The game seemed to draw a lot of inspiration from Fist of the North Star but was very comical and zany. I think that unique and nutty martial arts action would be greatly welcomed to a roster.

Phoenix Wright (Ace Attorney)
This could be epic. People have wanted to see Phoenix in a game since SSBB. The way I see it he could summon friends for specials like Captain Commando. I think he'd make a great comic relief character as well as an epic addition in general.

Rad Spencer (Bionic Commando)
I love Bionic Commando and I know a lot of people still consider it a classic. Despite the new 3D one being a commercial flop, "Rearmed" was extremely successful. Enough so that Capcom have actually green lit a sequel so you know BC is still on their mind. I think Spencer could be this "retro" character of this game. Kind of in the same vein as Strider and Captain Commando. Gameplay wise he could borrow a bit from Omega Red.

Date Masamune (Sengoku Basara)
I've only had a brief chance to play the poorly localized version of Sengoku Basara called Devil Kings. Even that I though was pretty fun. It's basically Capcom's take on Dynasty Warriors and I think it's better. Either way, the series is pretty popular in Japan and it looks really cool in action. The way I see it, Onimusha had a turn in TvC, so lets let a different Capcom samurai be in this one. There was already a Sengoku Basara fighter anyway so they have a good starting point.

Argh.. I don't see the need for TVC's control scheme on the HD consoles; i.e. the ones with buttons to work with

My two most wanted characters are in. This calls for something nonsensical and irrelevant to show my glee...

Seriously though, did we doubt these four after seeing the silouhetted images? XD

Zero mentioned to me something about Deadpool beating people up with his health-bar? Zero, elaborate for the good people on what you meant when you told me that! Where did you hear this rumour/news? XD

Seriously though, did we doubt these four after seeing the silouhetted images? XD

Zero mentioned to me something about Deadpool beating people up with his health-bar? Zero, elaborate for the good people on what you meant when you told me that! Where did you hear this rumour/news? XD

If I recall correctly these new character confirmations were from Game Informer and there was an interview or something. They said Deadpool breaks the fourth wall and that using the health bar the beat up people was a move. Likely a Super if true. Not totally confirmed until we see it, but still a great idea.

That sounds friggn' awesome! I can totally see Deadpool beating the crap out of someone using his Health Bar xD

Yeah, it does sound like a super move, don't it? XD If they're smart enough to put a move like that for Deadpool in to this game then it seems he's in safe hands. I'm just hoping they get a decent voice actor in for him. The dude who did the voice for Deadpool in that Hulk vs Wolverine animated movie is cool, i'd hire him for the job.

I wonder how much of the old line up they'll keep from MvC 2 though. With only 30 odd character slots for this game, it's evident a huge selection of MvC 2 characters are getting left out. Not that i mind, i hope this line up will continue to be solid as it's currently looking lovely.

I spy Servbot's and Rainbows<3 Plus, Chris + Shotgun = Epic

SHOTGUN TO THE FACE! Typical Resident Evil style, lol! LOVING the look. It looks so shiny and new. And someone has finally made Morrigans hair the proper green shade.

I'm still waiting to see Deadpool in game. He's going to look so bad ass, given the Capcom treatment.

Well well welly welly well. What have we here? XD

I'm so glad to see Deadpool and Dante absolutely, undeniably confirmed. Cap is great too. Now give us Thor and we have the Avengers. Felicia...meh. I like her but she'd so ridiculously par for the course of you know what I mean. With very few exceptions the whole Darkstalkers cast is extremely vibrant. Couldn't they for once pick a character from the games without boobs? Lord Raptor needs more lovin'. If the tribute book is something to go by, he's got to be more popular than Capcom realizes.

Epic. Goddamn it's good to finally see Dante in a crossover. Kamiya's wishes be damned. XD

Lol, and i was expecting an entire trailer of those two characters. Their part was incredibly short XD; Still, it was epic to see Deadpool pull that face he does.

Can't wait to see Deadpool starting breaking 4th wall in his comics and referencing this game, lol. Shouldn't be too long now.

God, I laughed my ass of when Deadpool got knocked out and yells "You pressed the wrong way!"

Neat, they say the teammate's name when you switch now..
I hate these changing voices though. Old cast was perfect dammit

It looks so awesome! I'm gonna suck so badly at this, lol! XD

lol, Deadpool yelling "you pressed the wrong button!" when he loses is classic Deadpooly goodness. They've done a great job with him.

The boss of MVC3 is Marvel's Dormammu

Dormammu? Kind of an odd choice but hey, I'll run with it. He's a decent Marvel villain. Glad they're using his newer appearance. His older one would look cheesy as all hell.

Not bouncy enough. Not going on my team. XD

It's true what someone said in one of those videos. Are they going to animate the mouths when they speak?

It's true what someone said in one of those videos. Are they going to animate the mouths when they speak?

1. The game is still a year off and what was on the floor at E3 is very much a work in progress.
2. Even in Street Fighter IV, characters only really move their mouths during close-ups
3. There's no real reason they should move their mouths. The action is going to be so frantic I doubt people would care anyway.

Ryu can now AIM THE SHINKU

I wonder if the addition of the side-exclamation 'Viewtiful' might confirm the appearance of a certain red clad individual.

I also saw Dante whip out the Artemis gun in that round too. This really has me wondering a few things considering his appearance in this game is based on his DMC3 iteration.

1. How many of his weapons does he have?
2. Is his movelist somewhat dictated by his groove like how you chose his style in DMC3?
3 In that same vein, do you swith styles on the fly like Megaman Volnutt in TvC?

Chun-Li and Doom are cool to hear. Super Skrull and Trish make me scrath my head. Well, I gues Super Skrull is one way to kinda get the Fantastic Four in there. Man, first we hear Dormammu is the villian and now these two join the roster? I wonder how many other weird picks Capcom will make. Just please don't bring back Marrow and Shuma Gorath.

Here are some trailers from San Diego Comic Con by the way.
Gameplay trailer (absolutely wait to the end of this one)
Character Trailer (I saw Viewtiful Joe's silhouette at the start and Deadpool's health bar super is at 1:45)
Character Reveal

The more trailers I see the more this looks like it's closer to TvC's gameplay. Can't really say why for sure.

Chun and Doom are a given, I wonder about the need for Trish also. Super Skrull looks like fun. I think the 2.5D models, in air swap combos and all give it obvious TVC like qualities.. plus what we've heard about the control scheme. General feedback dictates Capcom strive to make it as similar to MVC2 as possible.

MY WISHES ARE GRANTED

Newsbits: There will be JP/ENG voice selection for Capcom characters

I still think Trish is a lame addition and a wasted slot. The only bad choice announced so far in my opinion.