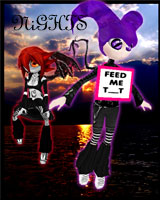 Missions. They give you something extra when time-attacking isn't enough. Kinda' wish you could do them after beating the basic game then go back and do them for the alternate ending, but eh. Still pretty interesting.

I think the voices added a great amount of depth to the series without scaring off younger gamers who don't want to get too emotional or deeply involved in the plot.

Wizeman's got the perfect voice actor, though, hands down.

In Topic: What is Owl's job or purpose in Nightopia?

He's like an old teacher who likes to emphasize his brimming wisdom to the point of irritation. Which would explain why NiGHTS is all like "WDFX, shaddup ol' bird. Let's go learn through EXPERIENCE." He prolly used to be really tough and maybe he even convinced NiGHTS that his ways were wrong and introduced him to the beautiful things in Nightopia. I'd like to think he's not just some oracle that sits around talking.

In Topic: If you were Reala what would your last plan had been?

I'd pretend to have turned a new leaf just like NiGHTS, be friends with them, grow an odd complex in my mind, then have to resolve it by betraying them sooner than I'd planned. Prolly end up putting Helen and the blonde kid in an nighty-bake oven and allow them to melt during a hallucination, followed by telling NiGHTS Wizeman's changed his mind and wants him to come home.

T^T Then, after a heartfelt family reunion, we'd boil NiGHTS in a one-way bubble as the Aquarium turns black and red. Mwahaha!! X3

That's why I'm asking them FIRST off. I mean, if they support a fan website with information on NiGHTS and non-canonical fanfare everywhere, what difference does an interactive graphical program (game) make?

Of course, unless you're a lawyer, it's hard to rationalize legal jargon into something like that. XD I'm hoping for the best.

You haven't been on when I'm on, I guess- I get little time to chat since I have to work on the project anyway. PM me a time- again, we shouldn't discuss chatting on the forum. XD