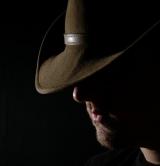 Hello all! My name is T-Bird! I am a Libra, with blue eyes and a designer beard! I love Pizza and I am also addicted to the Strawberry sweets you can get in pick n' mixes in cinemas!

Oh yeah...I also have a hat that seems to have become my trademark! It tends to get worn whenever I travel great distances, and has sat upon the heads of many people, including the infamous SEGA composers Jun Senoue and Richard Jacques, as well as Martin Leung, the video game Pianist, and Tommy Tallerico of Earth Worm Jim fame.

Some of you may already know me - I came in Second on the "Wrecksfactor" Karaoke competition run by Sonic Wrecks back at Christmas, and of course came in behind your illustrious leaders TRiPPY and DiGi Valentine! I mostly loiter around Sonic Wrecks and The Sonic Stadium, as I'm a bit of a Sonic-loony; particularly when it comes to tunes from the Sonic games and collecting related merchandise!

NiGHTS is a game I've only recently started to indulge (although I was at one time addicted to the NiGHTS pinball machine in Sonic Adventure!) and who knows, maybe one day I'll get round to properly playing Journey into Dreams as my brother loves it!

I hope there are plenty of new and fantabulous friends to be made here! Catch you guys and girls around!

Sonic City- A Race to a Name Poll!

I've flown over from Sonic Wrecks to inform you of the "Sonic Chronicles: The Dark Brotherhood - A race to a name" competition which is currently running over at Sonic City.

SEGA have given us fans a chance to have a say in the name of one of the new alien races that will feature in the DS title when it is launched in the Autumn. A few members from Sonic sites and Sonic forums (such as Sonic Online, SEGA Nerds etc) were given a chance to generate ideas for a name for this new alien race, and 10 have been selected - Among them are names like "The Psykore", put forward by Dreadknux & Roareye Black of The Sonic Stadium.

Echo Hawk and myself have generated the name "The Gravitus" as our submission!

So here's the part where guys and girls come in! Head over to Sonic City and cast your vote so you can have a say in the name of this alien race! If you want to vote for Gravitus, that would be awesome; it would be Ultra-Fantastic (And a dream come true!) if my suggestion makes it into a Sonic game!

Thank you peeps, and remember to tell your friends (to vote Gravitus) too!!!