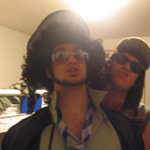 gasman hasn't added any friends yet.

In Topic: What control scheme do you prefer?

I prefer the nunchuck, but I'm fairly comfortable with the Wii Remote to use it in play and not completely fail. But if I had to choose, I'd go for the nunchuck. I can make easier flight changes with it.

Although, I can make sharper turns with the remote.....

Dude, at first i thourght this was spam LOL.
But no, i havny heard it. Nor do i like the Who.

In Topic: (make a little) Birdhouse in Your Soul

They Might Be Giants are my biggest influence when it comes to music and so much more. I remember I saw them in concert in DC, it was on 16th street, eight dollar admission, it was great! The nerdiest concert I have gone too, and one of the best. And I say that when I have also seen Clapton and Velvet Revolver and Tenacious D, so yeah. TMBG rock.

I've played the guitar for the past four years, but I learned a few basic chords a long time ago since my dad plays. I own a blue Epiphone Les Paul, a Thompson acoustic, and a Rouge sitar-guitar. I am currently in the works of a comedy-ska band, but the only members are me and a friend Ryan who's gonna play the kazoo.

Town Called Malice by The Jam