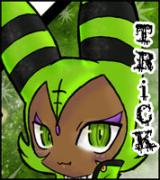 Ai the Red Queen hasn't added any friends yet.

In Topic: The art of the Ki

Your artwork is AMAZING~!!!
Though I wonder how long a NiGHTS Rappy would play dead...?
Before it runs away...

Or would it EVEN run away...?
It could give you nightmares... XD

I have 5 Fanmarens... 3 of which are more/supposed to be used more frequently than others...
As all three of them bicker like children over a cookie
The chibi maren in the picture below is my main Fanmaren, TRiCK The CHESHiRE:

And above are 4/5 of my marens, PRAMViE is the only one I didn't add in the sketch...
From the upper left clockwise: TRiCK, PYXiS, iSHTAR/Bravada , and Syncerati.

Oh my I realy like your maren TRiCK, he kinda reminds me of my maren DiSCORD just cause of the black and green ^^. Could I draw him some time?

Aww, I gotta say for a human shaped maren it looks unique though his tail doesn't look very connected (whether that was intentional idk).
You sure the last one isn't scary

Actually...
It's attached to him~
Buuut he's a maren, anything can happen with those blokes~
Disney's Cheshire cat could take off his own limbs~
(Actually he could use his tail as a weapon...)


And Wizeman thinks the picture is scary~ XDD