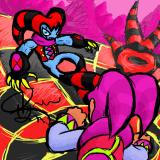 Awesome pics Charlie dude! Cant wait to see the video.
and wow! 3D pian egg!! It's amazin what I find interestin... lol.
On a side note, toast and nutella? gross! XP

its probaly a pian coin,all it is is just some pian that follows u for a short period of time,idk what it does,i just know its a coin.

They collect Chips from a wider radius than normal for you.

I hate the voices. Wish I could turn them off or switch them to Japanese... Then again I only play the chase missions now so I never have to hear them again anyway.

Any chance you could capture a video Charlie? Sorry, but I really want to see NiGHTS fly around in that get-up lol.

Awesome Charlie! Thanks for tellin me to come look. Although now I want this on wii more than ever. -Trev