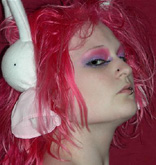 Hellooo wondered if anyone on here reads the Vampire Chronicles by Anne rice?
Im on the one about Aramad ATM ^^

and my gowd!! she says she isn't writing any more VC books O_O;; because and I quote "she has re-found god"

yeah... you spend your life writing books about evil, and NOW decide its a good idea to go back....
shes aparantly writing a book about the life of Jesus, didnt anyone tell her theres already a book about that? its called THE BIBLE. ahhh LULZ

Following on from my topic here: http://www.nightsintodreams.com/forum//ind...p?showtopic=453
on how to make you own fan Maren, I was wondering if everyone would do me a HUGE favour and post up a picture of your own fan maren? it would help me out a lot ^^ also I think its nice to have a page where people can see all the ones created, as I donât think there is a page for this already?

Thanks again everyone for putting up with me and my questions! they donât call me "The pest" for nothing ^_~

how to make your own fan-Maren? guide? UPDATED

I just finished the rough draft of my fan Maren ^^ for the time being Iâm going to call him âAypricot Kleptomaniaâ
Please leave constructive criticism!!

This is the simplistic colour version, which I like

Im thinking of making the triangle parts of his tail armour, just like markings instead of having them rasied.... also will prob re-colour said armour Blue, and take off some of the black.... try and limit it to 3-4 max colours....


I wish there was a âhow to make your own fan-Marenâ guide ^^;

I keep looking around on DA and seeing everyoneâs fan Marenâs and NiGHTS characters and I must admit that I want one of my own ^-^; *blushes*

I mean I am a very creative person ^^ but when It comes to thinking bouncy nightmare-ish ness that wellâ¦ needs to be as odd and colourful and bright as Marenâs are I kindaâ¦ well shy out ^^; I think to myself have I go too far O_O; is it to Kitsch?

I have an idea of what she/he would look like, but I wanted to come on here first and ask if there are any no-noâs when making a Maren? Or must dos? Really I guess Iâm asking for advice? Those of you who have your own fan Marenâs how did they come about? Should it be something that just comes to you one night? Or did you design them?

donât get me wrong I donât just want a fan-Maren because everyone else has one, I want it to be my avatar in the NiGHTS community, so people will no me as Tashy with the-such and such- Maren

Anywhoo ^^; thanks for reading my ramblings ^.^ Woo for some odd reason my spell checker likes to capitalise Maren O_O; Oh! If this is in the wrong place sorry

Hello all well I thought I would prostitute myself further by posting up my crazy little deformed plushies on this lovely forum unleashing there evil upon you allâ¦erâ¦ I think this is the part were I go Ã¢â¬ÅmwahahÃ¢â¬Â and Lighting flashes O_o; But hey, enough crazeâ¦

Due to the fact that whenever I Try and post images of my plushies up here they dont seem to want to work, Ive decided to simply Hot link you all to my Website:

or I can be found at:

go in have a look around and sign the Guest book!

Hello ^^ My name is Tashayarna

or ya'll can just call me Tashy ^^

You will come to know me as the one whose hair changes colour more often then I change my under panties ^.^

I also LOVE to hoard fabric, Collect Japanese Dolls named Pullips, and give stupidly expensive gits to friends... I love Hair dye and have been every colour under the sun, I am a Pagan I am 20 years old, my star sign is the Libra and the Tiger, Iâm in love with the most wonderful man alive!

I am a DevianTART ^.^ and Iâm DAMN proud of it! ^___^ I make Plushies! and you know you want one! Iâm also in a really HORRIBLE FEUD with SiLKâ¦yesâ¦.we hate each other O__O