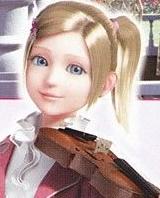 In Topic: So, no more NiGHTS?

I don't think we'll never see another NiGHTS game. The truth was this Wii game was a gift from SEGA to not only loyal NiGHTS fans, but to expose him to a new generation as well. While the game had its flaws I was glad they made it. I always felt that the first NiGHTS game was almost too ambitious for the technology of the SEGA Saturn. I actually enjoyed the voice for NiGHTS after I got over the initial shock. After all, NiGHTS has no gender and the fact that he/she has a British accent makes sense because it makes the dreamers language and accent. NiGHTS' voice depends on the dreamers he/she's connected to. So maybe if there's a third NiGHTS game he/she'll sound completely different!*lol* Just think! Austrailian NiGHTS!

Now this is something I can get behind. When I saw NiGHTS on PS2 I got all excited then realized that it was only for Japan. I signed the petition, but I will admit I would love it if I got it for my PS2 in America.

In Topic: The Last Wave

I'm actually impressed with how organized and well you've thought this out.

In Topic: We didn't forget NiGHTS!

It has really amazed me that SEGA actually listened. I'm glad to see he's going to be seen at the start of every race.