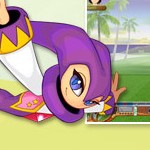 In Topic: About this delay

iLLVAiLLiN - That's why I said "recently". I looked at GameStop's game page beforehand and noticed that it must've switched back to the 18th. Anyway, this 10-20-second On the Spot conversation is really controversial. Thanks for the response. :-)

Spinningcannon - I hope that those three release dates are valid as well. I'm really wishing for some concrete release dates I can look forward to. Whatever they may be, you're right. Thank goodness JoD wasn't released in October! Sheesh!

DiGi - Hi, Mr. DiGi. This is entirely foreign to the topic, but I really enjoyed the latest Dreamcast episode you and TRiPPY made. I simply could not contain my laughter. :-D Anyway, as a result of this feedback you guys are giving me, I'm not too sure of what to think about this On the Spot episode now. Were they really discussing the PS2 remake? After almost every game that On the Spot plays, someone always mentions when that certain game is arriving in stores, whether it be "TBA", "Q1 2008", etc. If Ricardo Torres was aiming to be funny, he missed the target. NiGHTS fanatics like us want a straight answer!

Purgatory - You're wishing for a delay, too, huh? I agree that some areas of JoD look very unflattering. Here's hoping that the final product looks better than what we've been seeing. (Although that's a slim chance.) :-|

In Topic: About this delay

Some of you might know about yesterday's On the Spot GameSpot episode, with JoD being one of the featured games. (Awesome new level!) A host of the show, Ricardo Torres, said that "[JoD] is obviously coming out this year", but then a few seconds later he concludes the conversation with the Sega representative by stating "January 2nd". (This occurs at around 54 minutes into the show.) I also heard that GameStop had the game listed with a January 2nd release recently. Perhaps JoD is getting launched in Japan on Dec. 13th, in America on Jan. 2nd, and in Europe on Jan. 25th?