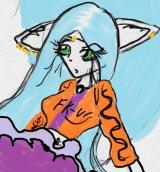 No latest visitors to show

In Topic: Hi all, Reala here.

Wow, the NID forum has royalty in the house! It's a great honour to have you here. I hope you enjoy the forums.

Now...I wonder what would happen if the voice actor of NiGHTS ended up here too?

In Topic: So, no more NiGHTS?

Personally, I really have mixed ideas about this. Sure, it took NiGHTS a long couple of years to get back on the scene and into a very pretty game, not the best to the original, but still; and then going back into the shadows for a short period of time until that big fight to get NiGHTS an appearance in Super Star racing, but no I don't believe this is the end of NiGHTS. My reason for this is because there is so much noise for NiGHTS everyone's making - especially from TRiPPY and DiGi (who on earth could not hear him?) for the NiD15 campaign and so on is un-ignorable . And plus, after that notice of 'Another NiGHTS' and everyone going mad and all that on a 50/50 chance too. To be honest, I do not think we've seen the last of our favourite purple jester. Not anytime soon, but in the next couple of years maybe we could see another game propping up after a long wait. Who knows? Maybe there will be, maybe there won't.
But I very highly doubt the noise about NiGHTS will ever die I can pretty confidently say that be me a raving NiGHTS fan or not, and quite frankly, I have and always will be one. But that's just what I think.

In Topic: Jackle for NiGHTS 3?

I'll lock this topic if you guys get too carried away with ideas like spamming their email or rampage wars. Simmer it down a bit.

Hey, sorry about that. We were just having a bit of fun with words, we're not going to kill anyone, spam email's, rampage to SEGA (heck- I give SEGA full respect) or anything like that anytime soon. We'll calm down, just please keep the topic open- people like Jackle and want him in the game and want somewhere to say that

In Topic: Songs that remind you of nights

Very unlikely songs for reminder of NiGHTS are for me...

. UltraViolet- The Stiff Dylans (It made me think of UV NiGHTS instantly!)

In Topic: Jackle for NiGHTS 3?

Screw the rocks i have paint guns!

Then paint guns it is! We'll crash SEGA in a rampage war