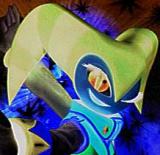 Hi there! I've been a NiGHTS fan for almost 25 years now, and I have a Fan-Maren I call Surreal, which is why I gave myself my handle name.

I've been a fan of NiGHTS since winter of 1997, especially after NiGHTS had his own comic book by Archie Comics. I never had a Sega Saturn and hadn't played NiGHTS into Dreams back then, but I was overjoyed when in 2008 I got NiGHTS: Journey of Dreams with the Nintendo Wii for my birthday. Otherwise the only other way I've played something like NiD was in Sonic Adventure when Sonic plays the NiGHTS Pinball game. Sometimes I got on Sonic Adventure just to play the NiGHTS Pinball minigame for about an hour at at time!

I used to dream about NiGHTS average three times a month

Finally I was able to play NiGHTS into Dreams in August 2020! I finished both Claris and Elliot's stories and unlocked Christmas NiGHTS in December 2020 (I never beat that one yet). Reading the fanzine NiGHTS into Zines renews my love for this fandom every month!

Some Favorite Books: Interview with a Vampire; The Vampire Lestat (not done); I, Robot