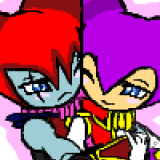 Well....
What should I write down here?O.o
Oh man, IÂ´m so BORED.
Someone who wants chat with me or something?

I started to like NiGHTS for some months ago thanks to Sonic and SEGA superStars Tennis.lol.
IÂ´m a artist and also a cosplayer.
Can get really silly and love random thing.
*sigh* I dunno what i should write more.:/
Anyway, I love to make new friendships so you can chatt with anytime.<3

Sorry for my really bad English.:/

I'd rather have a spin off, to expand the world and give the developers more room for creativity. Maybe after, a 'real' Bayo two, after the developers have more time to gather ammunition.

I`m also trying to learn me the dance.:3
I wanna dance and sing "Fly me to the moon" when IÂ´m cosplaying as her in for a audience .
Lucky me IÂ´m still little lithe even if I haveÂ´t move my body so much or dancing.
I hope itÂ´s will go weel for you and hope to see a video of you dancing. that would be so cool. ^^

Thx, IÂ´ll make the suit with all of hers special details.:3
Gonna take time on this cosplay to make sure it will look just like the original.

I was planed to cosplay as Bayonetta next year, and hope that I got the right face form for her.
Not only will I try to cosplay as her, IÂ´ll also try to dance like her and learn some moves.
This was just a make up test bc I was bored at the time.
Took the photos with my webcam.

I draw most of the arts on iscribble.com but not the to simple NiGHTS art to the left. X3