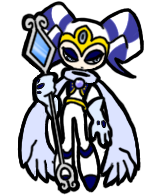 Rachell hasn't added any friends yet.

well I wasn't sure where to put this, since it kinda has something to do with our beloved purple jester, move the topic or lock it if neccesary

and no, this doesn't have anything to do with the JoD soundtrack

well, its kinda ironic you know

I have a friend from Mexico, well technically my best and cherised friend. A day somehow he managed to get a copy from the PS2 NiD...I dont know how thou but that's not the point

I told him that I've always wanted to play the original NiGHTS, too bad the saturn was never released in my country and the new NiD was a japan-only release...anyway, he kindly accepted to send me the game via air mail (man I was the happyest fangirl in the world, I love him so much), for some reason it took much longer to the pack to get here (Venezuela) and I was starting to get impatient...after 10 days, I got the pack in may's 28 at 10:27 am, I was excited, the game worked perfectly and I wanted to thank him for this beautiful gift... but for some reason he wasn't on msn

I got a message from my friend's brother, telling me that he had news about him...

he told me that...my friend passed away...an hour before I got the pack with the NiD game

that hurted a lot... I never had the chance to thank him, and the irony is that...I realised that he send NiGHTS to me as farewell gift.

I've been a fan of NiGHTS since years ago, but now...he will also represent a cherished memory of my fallen friend, may he rest in peace

weeeeell, my first art topic in the NiGHTS artwork section didnt go to well, so let's see if I will have more luck here

there are my works directly from DA (a.k.a Axl-fox's art)

one of my characters from Disgaea 2 (I wonder if anybody here knows about that game?) one of my OC one of my best works yet

if anyone's interested...here's my DA page

I personally think that he has an invisible body

NiGHTS sings for you

please I hope this goes here...

anyway, I was no joking about the tittle guys, actually, I've found a quite insteresting program called "Ghost FLELE" tis a ghost mp3 player that...well, how should I exlain it? just imagine a little fella singing your favorite song while invading your screen! well I'll get to the point. The thing is that I managed to make my own Flele Shells!

Download Flele here >>> MegaUpload the program already includes the NiGHTS shells, also, its a portable program so you wont need to install it, so dont worry

there are only two requirements for the Flele to work properly:

* Windows 98, 2000, XP and Vista
* Asian languaje package installed (if you dont have it then you can install it using your windows installation CD)

3: ok now FLELE should be running. let's make it english! (thou it is supposed to already be programmed in english) right click on either the character that popped up or the white circular icon in your toolbar, then choose language and make it english! then right click again and choose the last choice on the bottom.. it'll close the program. now reopen it and the right click menu should be in english! yays!

4: now we're gonna make it so it'll stay ontop of all your windows. right click again and go to options then make sure always show foreground has a checkmark ifit doesn't click it. and voila!

The Shell and Songs:

Now that you opened you opened your flele...Im pretty sure the first thing you will see (if you've acomplished the requirements) will be Reala, if you want to change him, just second click, select Shells, and there NiGHTS and Jackle's among the other shell's names will appear, to make your flele sing, just grab an Mp3 file and give it to the flele, it will ask you if you want to play it, then click "PLAY"

* be sure your files are in MP3 format, the flele wont play any other king of sound format
* be sure that your songs dont have any kanji characters, the flele doesn't like to play songs with funny characters/names, so watch out for your song's names
* your files must not be in a folder that its inside another folder

that's right, you can also pet your flele! just hover and click the mouse over the flele's head, do it carefully and see what happens!

well, I hope you enjoy your little maren singing for you!

EDIT1: thanks Kentilan, I didn't know the link wasn't working until now
EDIT2: oh, and if you want your little FLELE to be present on the screen all the time, just open the menu, go to Options > Always show Foreground, and ta-dah!
EDIT3: The RapidShare link has expired, now I've moved the archive to Megaupload

even thou I never had a dream involucring the purple jester, or any other kind of non-existent marens, but still I have some nightmarish creations in my file

note: the pics are just concept art, dont expect any kind of masterpiece

Name: Zephyr
Gender: Male
Race: Pian
Current status: Alive
Age: 235
Likes: Classic music
Dislikes: dishonesty
Small Bio: Zephyr didnt born from a pian egg like other pians, some centuries ago; a child with an ideya of Hope went to visit Nightopia and meet the nightopians, he was so fascinated with the small creatures that he wished to create one by his own. His prayers were so strong that eventually the light of the Ideya of hope created Zephyr, and that's the reason he looks so different from other pians, he's also able to speak both pian and human languaje

Name: King Cylan
Gender: Male
Race: Super Pian
Current status: Alive
Age: 764
Likes: Order and justice
Dislikes: Nightmarens and disloyalty
Small Bio: King Cylan is a superpian that had been ruling since several centuries ago he's responsible for all the pians in Nightopian, and that explains why he despises marens so much, since they're the main cause of pians' death, he likes to rule with justice

Name: Aiguille
Name Meaning: "Switches" in french
Gender: Male
Race: Nightmaren
Class: Second class
Current status: unknow
Age: unknow
Small Bio: Aiguille is a moth-like second class maren with a body covered with lots of watchers and clocks, witch represent the time he has left (he's a kamikaze, so its hard to know about his current status) he uses to taunt people with fear to bugs Name: Furiath
Name Meaning: "Wrath" in spanish
Gender: Unknow
Race: Nightmaren
Class: Second class
Current status: unknow
Age: 500
Small Bio: Furiath is a Nine tailed fox-like second class maren, actually its body is controlled by the masked tails who also use the other tails as arms to attack with knifes, this maren likes to taunt dreams of people who are too supersticious