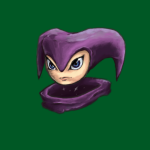 id say its just the dongle. how far is the wii from the dongle? it might be crappy if it's through a wall or something, but if it's right next to it, it'll just be the dongle.

the adapters are like 20 quid though, it's like wtf, it's a tiny little piece of crap. suppose you do get a bunch of cable with it as well, i'm gonna have to get one myself. why in gods name does the wii not have an ethernet port?

aye, that they do

oh man, i got quite far with tetris into dreams, but i don't really know what to use for all the bloks, ya see, i've got all the ideya put in, but i have one more block....

i now have a cheats/freeloader/ram cartridge and panzer dragoon.

In Topic: NEXT NIGHTS

Am i the only one who feels that a hand held console version of a NiGHTS game is a bad idea?

Also, i'm all for the NiGHTS franchise kicking off. Iizuka KNOWS the difference between Sonic and NiGHTS and knows that he can keep a NiGHTS franchise alive without having to make a 'NiGHTS Kart', 'NiGHTS Shuffle' 'NiGHTS Fighters' and whatever other shyte they could copy. NiGHTS is based on dreams so technically the possibilities are endless for level design and features. Even the 'rollercoaster' and 'boating' sections don't look that bad anymore in JoD. Sega wouldn't need to make spin-off games for NiGHTS to keep his franchise going.

i'll be honest. i disagree, drive by argument style.

NiGHTS would be so well suited to the DS it's unreal, the smoothness of the touch screen would really have a good feel for the original game, plus, instead of working all the time... I COULD BE PLAYING NiGHTS! on an aeroplane. or on the back of a bus. girl i've been waiting for it, i've been waiting for it....you make me wanna play NiGHTS, on DS, on DS, play NIGHTS...

also, sega just ruin games. they do. it's a fact. they've already slightly diminished the awesomeness of NiGHTS (no link attack WTF?? mystic forest remake looks like crap too SO GREEN AND BORING) and although JOD will be awesome, methinks they'll just lose sight of the original and spew out something that's just.....shadow the hedgehog all over again. Nasty. just plain nasty ass.


do feel free to prove me wrong though...?