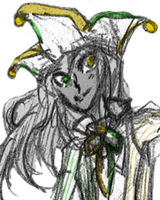 Wow, uh...Long time no see, guys! Not entirely sure if this is the right section--wooooah forum changes--but it seems close enough!
After a massive bout of nostalgia I caved and made a NiGHTS RP blog on Tumblr: As fun as interacting with so many different characters from other series is, I'm not sure I'll be able to do much without other NiD/JoD characters to interact with!

So I'm wondering if any of you have NiD/JoD-related accounts on Tumblr, or if anyone would be interested? Even if they're OCs, that'd be cool. :B