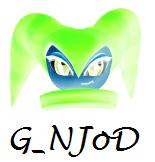 G_NJoD_07 hasn't added any friends yet.

Do you think they will use the old ones? Create new ones? A mix of both? I say new. They will probably be scarier than the in the first game.

I need some references...

I'm hoping to make a computer game if I can get a good enough reference of all the characters.

I'm here to do what everyone else does. Discuss NiGHTS!

I'm just as excited as many people about the news of NiGHTS:JoD and the new podcast.

That's it I guess.