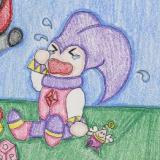 Metaria hasn't added any friends yet.

In Topic: A request to D.A/Sheezy/S7 NiGHTS artists

"If I Was Your Vampire," by Marilyn Manson.

Usually I don't listen to his stuff, but I heard this one on the new Max Payne movie trailer and got hooked.

I like the eyes. Very large and sparkly. =D
Great job!

Have good recommendations of songs?

I like Ali Jihad Racy's "Mystical Legacies" and "Ancient Egypt" albums. (Technically, they're Arabic music, but got filed into the new age category.) He uses traditional Arabic instruments in his work and the "Ancient Egypt" album was composed for the Seattle Tutankhamun exhibit back in the 70s. Careful when ordering them off Amazon though, as it took them eight months just to get ahold of a copy for me, but that was before the downloadable option was introduced. (I love you too, Amazon.)

Some new age musicians are independent labels without much publicity. So doing some research and looking around on your own might net you some treasure that might otherwise go unnoticed. =)

Ah, I've got Secret Garden stashed somewhere in the multigenre chaos that is my iPod. Good stuff.

New Age can and often will have some sort of religious theme, usually a message of spiritual journey and enlightenment. The music is a hybrid of classical and folk music, so if you want to get nitpicky, it's really old-age music recycled to appeal to a wider modern audience...

It's criticized a lot for being repetitive, and having little room for development of the genre.